Tuvalu has been campaigning for compensation from the west for rising sea levels caused by their CO2 emissions, as many other Pacific islands. Sea level is like temperature, in that it is not constant but varies from place to place, just less over a short period. But it's roughly averaged, and while James Hansen is the sea's hockey stick advocate, his rises are all in his very confused mind, many yards by 2100.

There are two causes of sea level from rising temperatures, melting ice and thermal expansion, which are roughly equal. But without the temperature rise the sea will do nothing. Then a small bounce back from the loss of ice from the ice age adds a little more. Local differences are also down to tectonic plates, so Britain is tilting so one side will go higher and the other lower. Likewise many low lying islands are on a tectonic plate which is falling, but that of course is independent of the temperature. But (although they are not entirely reliable are many times more consistent than the comparable temperature records as seen in my previous entry) local sea levels are pretty easy to follow as you only basically need a man with a pole and a tape measure and far harder to cheat. Satellites do it as well now, tide gauges/bobs and are then collected and added to get the world averages per year. But as local levels can only cause local disasters here is Tuvalu's. Where is the cause of the reason they are demanding our money again?

Realistically it is relatively easy to work out the available water from ice, and extremely easy from heat. The amount required to melt is also temperature based, with a delay as the latent heat required to melt huge glaciers takes some decades before an above freezing temperature will finally melt. Meanwhile back in the present the sea is rising since the last little ice age. These coincide with solar minimums throughout history, and then return to typical averages before the next one. So we are always between one or the other, so the temperature and sea levels always rise or fall in tandem, they are never static. Seven inches is a reasonably safe rise, which we experienced in the last century, and if the temperature rose then the expansion would be fast, with a delay for the ice which would gradually follow. The progress is far closer to linear than temperature as driven by so few causes, and by 2012 that trend has continued, and unlike temperature needs an awful lot more to happen for it to rise sharply. That will make it a lot easier to project than the rest of the climate as it takes a lot to change it, and can only rise quickly after an ice age ends. After the sharp rise following an ice age it slows down to zero, and then falls again once the temperature does. It always has and always will. 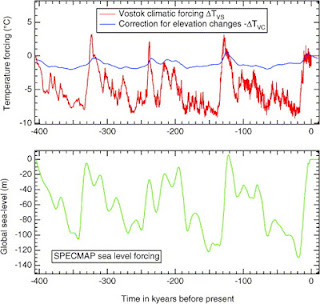 The sharp rises are when the ice ages end, and can see they are regular cycles, and the temperature also rises sharply every so often, we are looking at millions of years and those patterns are both pretty regular and impossible to have human influence. Putting temperature and sea level rises into historical context is something never seen in the IPCC driven publications, as once you see how minor today's changes are everyone would pack up and go home. So far only handfuls of people come here and see it, but the material's there and should have the same effect. The red temperature diagram has swings of almost 10C, which the planet and any life upon it survived enough to maintain a healthy mix of plants and animals. Unlike other animals mankind has the gift of foresight, and the geological periods it takes for sea level alone to rise give us centuries to plan. The reason people live on coastlines near sea level and flood plains is mainly due to overpopulation and ignorance, as despite regular floods simply as the tides are sufficient to inundate New Orleans, most of Bangladesh and The Netherlands, the simple vast rise in population (which is a hockey stick and rising even more sharply each decade, and totally genuine) forces people to unsuitable land, and then to blame ourselves (we all emit CO2, it's called breathing) and try to punish everyone else to compensate them for choosing to live in a fucking idiotic place is no less than extortion.

Bottom line, you can check yourselves, the land ice (Arctic ice can't cause the rise as only Greenland contains the stuff which can and that's not likely to melt in our lifetimes, so is irrelevant), and 90% is in Antarctica which is steadily growing. If Antarctica continues to grow, without a vast and sudden melt of the Greenland glacier there is nothing there to cause a rise. Where could it come from? And for the thermal expansion you'd need (I'm sure the equation is around) a temperature rise so much beyond anything currently possible it isn't worth considering. What's the point of thinking about something which both isn't happening and whatever the Hansens of this world are spouting are almost impossible, not because of individual opinions but current and historical data. Plus the prediction of long term temperature trends beyond the huge thousands of year ice age cycles are impossible as they are chaotic. And before anyone blames CO2 the 33C greenhouse effect the UN use has 1C from CO2, which would double if it doubles unless it has positive feedback. It has increased 50% already, and the attributed rise from 0.7C was 0.4, less than expected. There are no new phenomena to cause a delayed or surprise feedback, it was never expected to be, it is either there or not, and with that experiment half run observation tells you what exactly?
Posted by David at 20:30